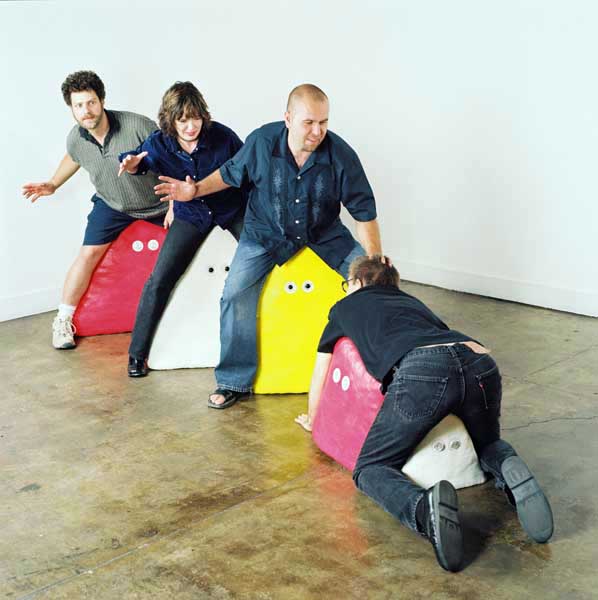 If you saw Michael Arata’s work around the mid-90’s, most curators would have told you he’s headed to hell in a hand basket. In fact, I can still recall a group show organized by Bill Radewic (“Documenta”-1996) in which Arata was outfitting gray scaled rainbows with machine guns. Arata referred to those particular pieces as “killer rainbows”-which was remarkably ironic. You see, at the time, most exhibitioners that were fortunate enough to grace the same halls as his work, esteemed him as anything but “killer”. As it turns out, the “Rainbow” series would lead to more art-this time, with greater maturity and significance.
In his most current exhibition entitled “Pet Spaces”, Arata builds upon the past with a series of photos posing as himself. In most of the photos he fills in the negative space between his legs and arms with color, assigning each of these “pet spaces” with fabricated dummy eyes. His poses mostly consist of him executing routine tasks like praying, making love, and playing games. In a few instances, he travels outside these safe boundaries by practicing ballet or posing in the same stance as a Victoria’s Secret model.

In one particularly memorable series of photos (“Spanking Machine 1, 2, and 3”) he gets a group of people to spank him in succession. As in the other photos, he makes sure that the blank space between each participants legs, like his own, are correctly accounted for with difficult to miss colors like hot pink and bright yellow.

The traditional knock against Arata’s work is that it’s too forthright, silly, and unimaginative. Some argue that Arata’s portrayal of negative space is overstated. While some of these points may have individual merit, they don’t by any means invalidate the substance of his work.

If there are any movements Arata’s work lends itself to, I can’t name them. In fact, for an artist living in Los Angeles, his work is about as un-Los Angeles as they come. In his photo FREDERICK’S OF HOLLYWOOD CATALOG POSE, for example, he pokes fun at the vanity of the famous lingerie chain based in his home city. Basically, he does a supermodel pose, but he’s dressed as a typical North American man, wearing a long sleeved shirt with black jeans.

Arata follows the same formula in other photos, with none being unduly self-conscious and always having an element of cheap entertainment. In the end, his work is inviting, not stuffed with long explanations, and furthermore, not contrived at gunpoint by the powerful hands of venture capital art dealers. Maybe this is why his work has been mostly avoided by the same group, established curators included.

To me, Arata is most about humanizing overlooked space and spaces in a world that isn’t paying attention. A good portion of contemporary America is too occupied in other worlds-like popular corporate hangouts such as Wal-Mart, Home Depot, and Starbucks. America is so consumed consuming, they barely have time to notice anything anymore. Rather than criticize his audience, (as I probably would) Arata gives them a gentle nudge in the right direction with his almost self-defacing demeanor. It’s this highly polished and professional approach that makes “Pet Spaces” his most accomplished, complete, and best work yet.