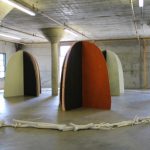 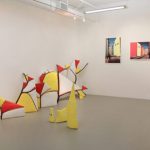 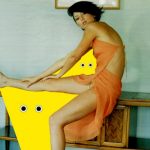 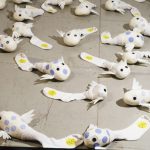 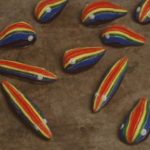 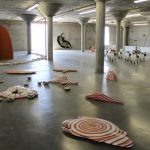 Such inspired madness may sound like the contents of a precocious and/or demented child’s toy box but in fact, they’re the building blocks of Arataland!, the “mid-career survey of artworks by Mount Washington’s Michael Arata:” a description that, while factually accurate, can’t begin to convey Arata’s mix of the playful and the disconcerting; the observational and the interactive.

Simply put, this show’s a doozy.

The exhibition takes up three floors of the four-story Beacon Arts Building: a warehouse turned exhibition gallery in the burgeoning Inglewood Arts District. The space is vast, but seems barely able to contain the fervid (and sometimes feverish) output of Arata’s fertile imagination.

In fact, Arata, who seems to have art pieces stashed in every nook, cranny and crawl space of his Mount Washington home and his Highland Park studio, confesses that at one point, he stopped showing his past work to curator Doug Harvey because he feared they were running out of time to mount the show. (Arata also nixed Harvey’s suggestion that he build a large scale recreation of his Rainbow on the exterior wall of the Beacon Arts Building.)  Despite Arata’s preemptive selectivity, curator and artist had to exercise the option for the top floor and negotiate for the second floor to house all of the work.

The collaboration between Arata and Harvey is the second in the Beacon’s Curators-as-Critics series, which is the gallery’s inaugural art exhibition series initiated by Beacon Arts Director Renee Fox. In his catalogue essay for Arataland!, Harvey, who has chronicled the Los Angeles art scene for almost two decades (including a 13-year-stint as the L.A. Weekly‘s art critic), describes Arata as an artist whose work falls in the category of “Theme-Parkism”: an immersive, interactive body of work that “rewards the viewer on multiple sensory and intellectual levels.”

What that means experientially is that you’re hooked from the moment you walk in the ground-floor door of the Beacon Arts Building.

Each level has a designation — participatory viewers ascend from “Negativespaceland” to “Innocenceland” to “ItsComplicatedland” – and Arataland! beguiles and bewitches as thoroughly and as efficiently as the Happiest Place on Earth. That is, as long as you’re prepared to swap out the garish pastels, faux foreigners, and animatronic tourism of Disney’s “It’s a Small World” for the primary colors, the Victoria’s Secret models, and the googly eyes of the “Pet Spaces” installation.

The artist is as engaging as his art; conversations with Arata have the same undertone of dark humor as his work, not to mention a tendency to veer off into wildly entertaining tangents. During a recent coffee-fueled chat in the Kite Hill, canyon-adjacent aerie where Arata lives with his wife and daughter, topics ranged from his crush-of-succulents garden (“I like them because they’re structural. And they’re easy to take care of. I’m probably killing them by watering them.”), to moles (“They creep me out because they’re blind. Also, they have no tails so you can’t pick them up.”), to Dungeons & Dragons and True Blood (“I’m interested in why this kind of fantasy is so popular right now. I think it might be a substitute for…conventional religion.”)

Arata himself has conscripted religion in the name of art; in his 1993 Angels series, he replaces lofty seraphim with cheeky, cuddly, smelly “angel larva.” Consequently, it makes sense that he’s intrigued by the “cult…of vampire, magic and aliens fantasy” as substitute spirituality and that he’s interested in exploring it in his future work.

Pondering the genre’s popularity, Arata wonders if “it’s [the appeal of] being able to play a role and then switch back to other clothes.” Or maybe it’s just that “people want to believe there are more possibilities.”

One visit to Arataland! and it’s clear that vampires, magic and “aliens” would fit right in.  Luckily, Beacon Arts Building has another floor….

This article originally appeared on Patch.com