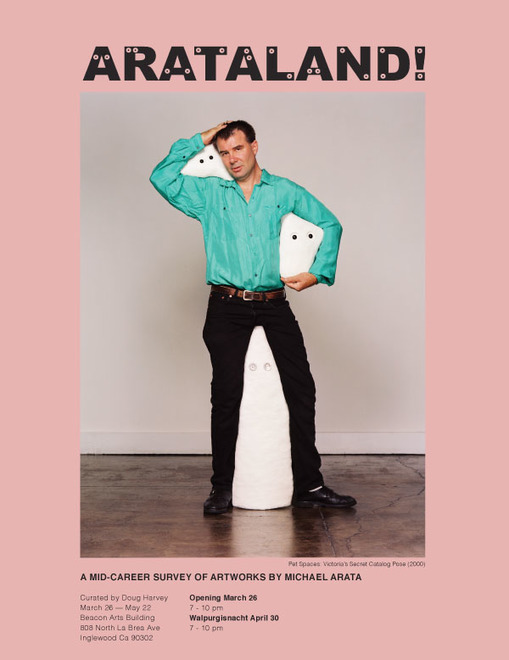 Arthur Danto in his essay, Why Does Art Need To Be Explained”/Hegel, Biedermeier, and the Intractably Avant-Garde,  proposes that contemporary art no longer has, “viewers”. Instead he speculates the proper description of a viewer would be that of an “encounterer.” According to Danto, a work of art is a moral adventure rather than an aesthetic experience. Danto predicts an artist/audience relationship that is at once carnivalesque and hopeful. Michael Arata’s mid-career survey Arataland! at the Beacon Arts Building and its accompanying essay by Doug Harvey suggests an inventive and humorous life open to change and yet rigid in its defiant stance embracing the relational aesthetics of his time in his own bombastic style. Because Arata has continued to work within the context of relational understanding, a survey show is difficult and at many times feels a bit disjunctive. One thing for sure, the show is never boring, from the gilded sphincter’s of sheep in, Flock to his more recent forays into spiritualism via shit in the series of floating turds entitled Souls, Arataland! entertains as well as it provokes.

Harvey’s essay implies that Arataland! is a place like Disneyland, a parallel reality that operates with its own play of opposites, art history and abusrdism in various forms. In Arata’s world angels spew methane gas and classical urns are cut up and reformed into paper dolls or intersecting diagrams. Arata consistently parses out theoretical shifts in painting, in raw humorous observations that are as uneasy as they are earnest. Arataland! wants to be slick but can’t help itself from slipping on the proverbial banana. For Example, in Arata’s Pet Spacesphotos, Arata re-creates the poses of Victoria’s Secret models as the ideals of feminine beauty, here is the catch, its Arata making the poses in the photographs. In Pet Spaces, Arata absurdly mocks his own masculinity and fascination with the Venus of our time typified by the Victoria’s Secret model. By mocking the model of beauty, Arata’s sexiness itself is nullified, that he chooses to decorate the areas of his own portraits with googly eyes is no wonder. The googly eyed negative “Pet Spaces” are as goofy as they are sad. In Arata’s own objectification he seems to turn the mirror on us. Through him we see desire as spectacle that prods us into such poses in the first place, and makes us all look a little pathetic. 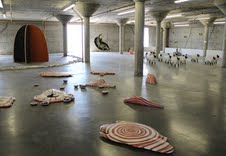 On the fourth floor adjacent to the massive installation Flock, is an inventive activity area, Obstacle Course Activity. The individual sculptural objects in Obstacle Course Activity are meant to be arranged and rearranged by gallery visitors in a game of target practice. There are other audience related activities such as his early work, Secret Messages via Pine Cone. Audience members are invited to inscribe their own messages on the white painted dry scales of a pine cone. The cones are then submerged in water where they close and hide the participants secrets.  The fourth floor of the Beacon Arts Building is itself an interesting context for looking at work with its massive concrete columns that evoke the aura of a parking garage or a club. Its an odd juxtaposition and Arata’s work is perhaps best suited to bridge the critical gap between what is meant to be an earnest attempt to present the building itself as a serious space to the greater Los Angeles arts community. The BAB has the same kind of witty intelligence as Arata, with small self-effacing touches such as chipboard wall bases and reclaimed restaurant furniture as community seating near the bathroom.  Arataland! the show, encompasses hundreds of objects several floors that are to varying degrees provocative and entertaining. Its  a solid show of an artist with an odd yet highly adaptable practice that is as determined as he is prolific.