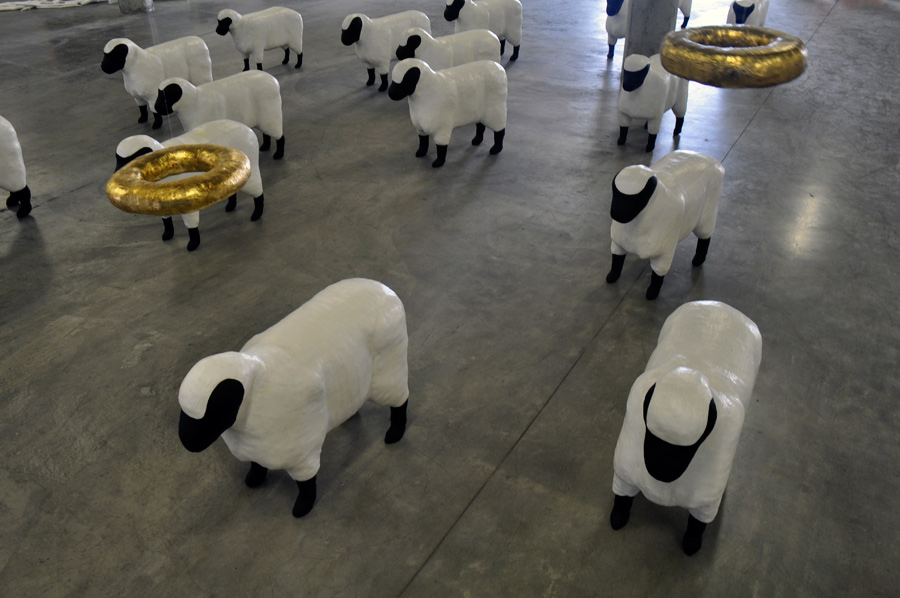 Arata is one of the most prolific, secretly popular artists in LA. He’s been working, showing, teaching, and curating for decades; but like many of his colleagues, he’s never been the subject of a full-blown retrospective. Until now. Art writer — and talented artist himself — Mr. Doug Harvey used his turn at the helm of Beacon Arts Building’s Critic-As-Curator series to rectify that situation. Occupying every inch and nook on three floors of the recently renovated retro industrial fortress, the sprawling survey presents a thoroughgoing but measured account of Arata’s many series, most of which he has worked on periodically over the years, organized in discreet groups and/or side rooms which lend themselves to this kind of thematic design. Both the overall conceit of the installation design and conceptual framework of Arataland! is an amusement park; with creative periods assigned accordingly and actual participatory games and experiments on offer. The checklist comes with a hand-drawn map and a pervy connect-the-dots game. The exhibition demonstrated substantial scholarship, a thoughtful selection process, and a bemused fondness for the more outre aspects of Arata’s practice — and the unconventional location suited the project perfectly. Arata is aware that a show of this scope and assertive irreverence would make unlikely museum fare, saying, “Inglewood is an outpost — some say ‘lawless,’ I say ‘fresh,’ a show like this could never happen in the confines of mainstream venues.”

Harvey’s accompanying catalog essay, “A Coney Island of the Butt,” is most likely a Lawrence Ferlinghetti reference, but it reminds me of the Henry Miller short story written in 1936, published in the collection Black Spring many years later but still way before 1958 when the legendary Beat poet brought his out. No disrespect to the Saint of City Lights, I’m just a Henry Miller kind of girl. I perceive a resonance between Miller’s writing and Arata’s art that goes beyond a coincidence of title. Miller’s semi-autobiographical protagonists behave with the same theatricality, appetite for entertainment, performative exhibitionism, cynical and literary wit, dysfunctional but seductive flash and dash, enforced sexual frankness, and soupcon of “crackpot,” that Arata’s best works convey. The story I’m thinking of is called “Into the Nightlife: A Coney Island of the Mind,” and in it, Miller recounts a dream as though it were a regular narrative, another short story nestled among many almost pastoral genre stories of the French countryside, embarked upon with no warning and delivering a hurlyburly Freud-fest of sexually charged, symbolically potent vignettes in which no one comes out a hero. 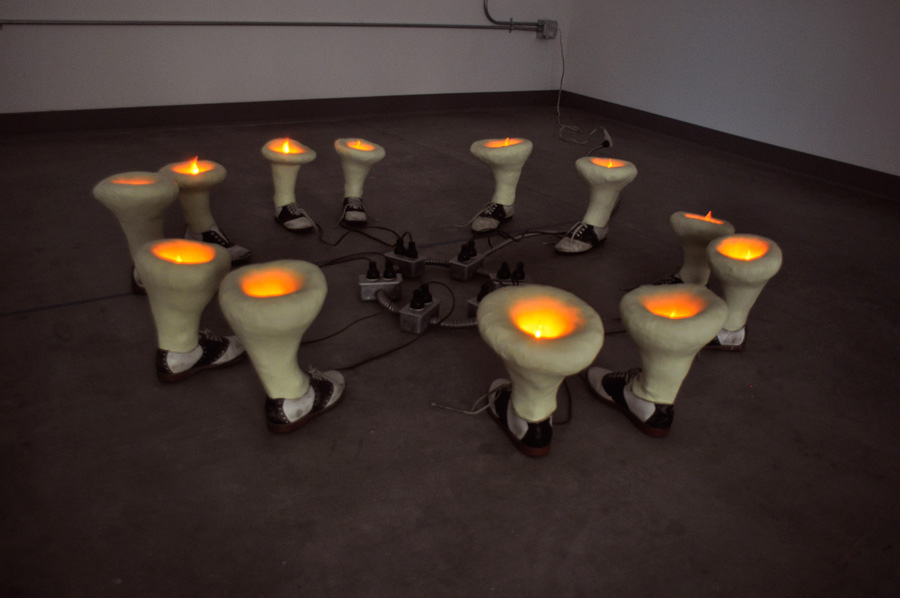 “There are three rooms, one after the other, like a railroad flat. I am lying in the middle room in which there is a walnut bookcase and a dressing table. The old hag removes her wrapper and stands before the mirror in her chemise. She has a little powder puff in her hand and with this little puff she swabs her armpits, her bosom, her thighs. All the while she weeps like an idiot.” (HM) Are Miller’s “three rooms” the ancestors of the three main campuses of Arataland! — Negativespaceland, Innocenceland, and It’scomplicatedland? At times, the Miller story reads like an inventory of the Beacon Arts Building exhibition, eerily literal in its evocative specificity, and similarly mischievous in its straight-faced delivery of intoxicating, sexually charged surrealism.

Negativespaceland is the main entry point into the exhibition, and contains the least objectionable and overwhelming portion of the survey, mainly an extensive assortment of variations on his Pet Space series, such as Pet Space Between My Wife’s Legs (Doggie Style)2000, c-print. Mostly made between 1991-2000, this series makes objects based on the shapes of negative spaces made by the body’s many postures. Usually something like triangular, the areas between legs and the floor, elbow and akimbo arm, hands clasped in prayer or sign language are outlined and highlighted. Sometimes this is done with mixed media on photography, as with fashion spreads (he’s partial to lingerie ads); sometimes the artist and his friends model more casually (and more fully clothed) and plaster casts are made as well as photo-documentation. They are smart and funny and at the same time perform an essential function of fine art — forcing the eye to notice what the brain is trained to dismiss. A lot of them are obliquely anthropomorphized through the application of googly eyes, like you’d see on stuffed animals; they seem then to be crafty cuddlers, nuzzling their host creators; and the viewer begins to care for the negative spaces of their own body. “A warm sultry haze lying over the city like a cup of fat, the sweat trickling down between the bare legs, around the slim ankles. A mucous mass of arms and legs, of half-moons and weather vanes, of cock robins and round robins, of shuttlecocks and bright bananas… a strip of bright shadow left by the iron girders. The trolleys wheel round with iron mandibles, crunching the papier-mache of the crowd.” (HM)

It’scomplicatedland is the part where the artist takes on the thornier issues of life, war, death, love, crime, punishment, and bravado — plus a bit of recess to keep spirits high. “I spring out of bed in my nightshirt and I commence to dance the dance of King Kotschei. In my nightshirt I dance, with a parasol over my head. They watch me without a smile, without so much as a crease in their jowls.” (HM) Rollers: The Game is a cross between Petanque and Dodgeball, as players enter the field and immediately lose their minds and composure, turning the low-walled alley into an hysterical free-for-all of unmitigated joy. Like so much of Arata’s sculptural work, the fat frisbee-sized pieces are lovingly hand-constructed from industrial materials like masking tape and paper, and are more or less indestructible. A similar piece was shown at Barnsdall but according to Arata, “the guards kiboshed people from playing with the pieces. They wouldn’t even let me do it!” Adjacent to the game and its viewing stations are a separate pair of co-related series. Remember, more usually known as the “hair paintings” is a suite of 54 drawings based on head shots of disappearance victims. Accompanying each skillfully rendered, deracinated hair-do is a set of facts relating to the tragic events that befell its owner. Beards & Mustaches (2007-09) also isolates single elements of personal grooming — archetypes of men’s facial hair. As with Pet Spaces these manscapes are transformed into exaggerated plaster casts, and viewers are encouraged to photograph themselves as a Pharaoh, gay cowboy, or Hasidic Jew. 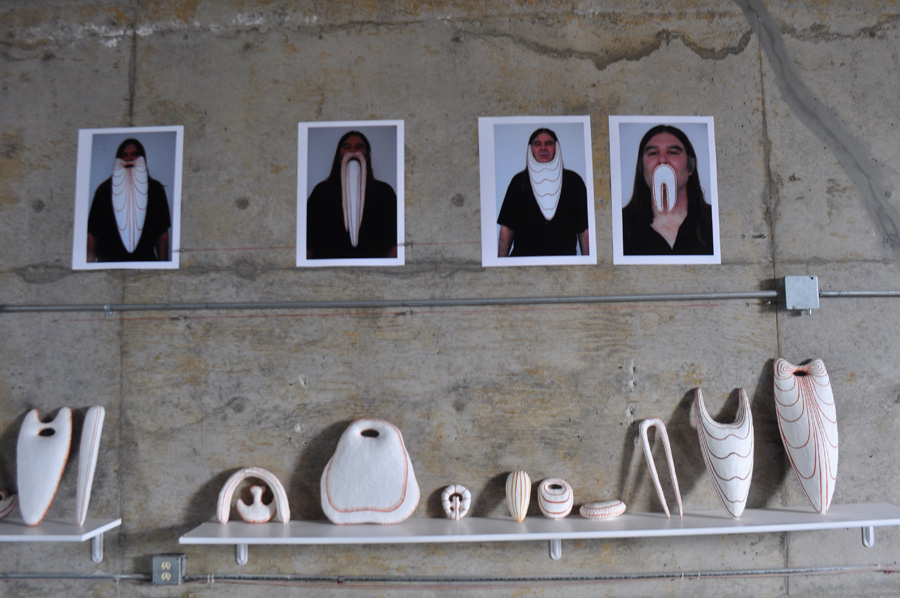 One of Arata’s special gifts as an artist lies in the alchemy of his craftsmanship. Despite his unapologetic use of ordinary materials, his insistently hand-hewn vernacular, and his apparent contempt for realism, his objects speak and sparkle and long to be touched, and there is a joy in their making that shines forth, no matter the blackness of the back-story or the blueness of the humor. Across a great sweep of room, viewers are confronted with the backsides of a flock of gold-orificed sheep, and beyond them, beckoned toward a tent city of the Promised Land; Monet’s Haystacks like a school-play set; and an array of giant-sized medical instruments made of cardboard. This work dates between 1984 and 2011, and part of its appeal as well as its disorientated context is that it’s not at all obvious which was made when. “Where am I to go if everywhere there are trapdoors and grinning skeletons, a world turned inside out and all the flesh peeled off? Where am I to lay my head of there is nothing but beards and mackintoshes and peanut whistles and broken slats? Am I to walk forever along this endless pasteboard street, this pasteboard which I can punch a hole in, which I can blow down with my breath, which I can set fire to with a match? The world has become a mystic maze erected by a gang of carpenters during the night. Everything is a lie, a fake. Pasteboard.” (HM)

Innocenceland is the most diverse concentration, with samples from a dozen series laid out in a labyrinth of smaller rooms and corridors radiating off the building’s loading dock. The psychological purgatory of the periods and series collected in this grouping is exacerbated by sense of decentralized wandering that the layout necessitates. There’s a map but it doesn’t really  help. You get separated from your group, you find yourself alone, you become anxious, and room after room is full of objects most people don’t care to be left alone with. “In the next room, which is the parlor, all the relatives are assembled. They sit in a semicircle, waiting for me to enter. They sit stiff and rigid, upholstered like the chairs. Instead of warts and wens, there is horsehair sprouting from their chins.” (HM) A small number of sculptures from 1991-93, the Little Virgins feature flickering electric candles and spokes of soiled, black and white saddle shoes, filled with wax and acquired by trading the girls for donuts, one donut per pair. They are old shoes, outgrown — it’s not like he was waiting outside some Catholic school in a van with a box of them. He asked their parents. But he’s fine playing the role of apocryphal pervert, and the creepy ritualized religious overtones and vague menace triggered by the mere sight of little lost children’s shoes are a major clue that the entire amusement park may have been deadly serious all along. Little Virgin Dress (1993) is a child-size wall sculpture of a white lace churchgoing dress with an under-skirt blossoming of sexy plastic flowers, and doesn’t help his case in that regard. It also rewards viewers for bending slightly to look up a little girl’s dress, making them complicit in the perversion. Nervous laughter and a slight hint of alarm is a common reaction.

In Arata’s most potent and unforgettable work, the viewer is first encouraged to judge a subtext of sexual perversion and pedophilia, only to find themselves implicated in the same. For most, the moment of inevitable freak-out comes in contemplating the haunting, art historical, and emotionally stern pieces such as the Little Virgins or crush-can Souls in the chapel room dedicated to the loss of his own daughter’s virginity (she was mortified). Paradoxically, those overtly high-minded works which are self-consciously executed to mimic serious fine art, elicit deep-seeded unrest in the average viewer. Whereas folks seem perfectly comfortable and convivial in front of the stuffed-animal taxidermy. “The monarch of the mind is a monkey wrench. Sovereign pasteboard power.” (HM) The obviously emotionally disturbed character of his most signature and iconic sculptures such as those festooning a gallery subtitled “The Orphanage,” which included Warm & Cozy (1992), and the other nursing pieces, are Freudian wet-dreams — insistently cheerful objects in which the polyester pelts of stuffed animals have been restretched and configured inside suitcases, with pacifiers, resin, foam, masking tape, and the occasional knife. Two such early cheeky surrealist masterpieces are Piano Bench (1992) and Surrogate (1992). Hidden quasi-vaginas with googly eyes and fuzzy-toy sex-parts is something people seem to understand in a giddy flash of acceptance. Once again, this says more about the viewers than the artist. It was not Henry Miller but Michael Arata who said, “Artists dig in the darkness and pull things out, brush them off and say hey, well, this isn’t really all that bad at all…” 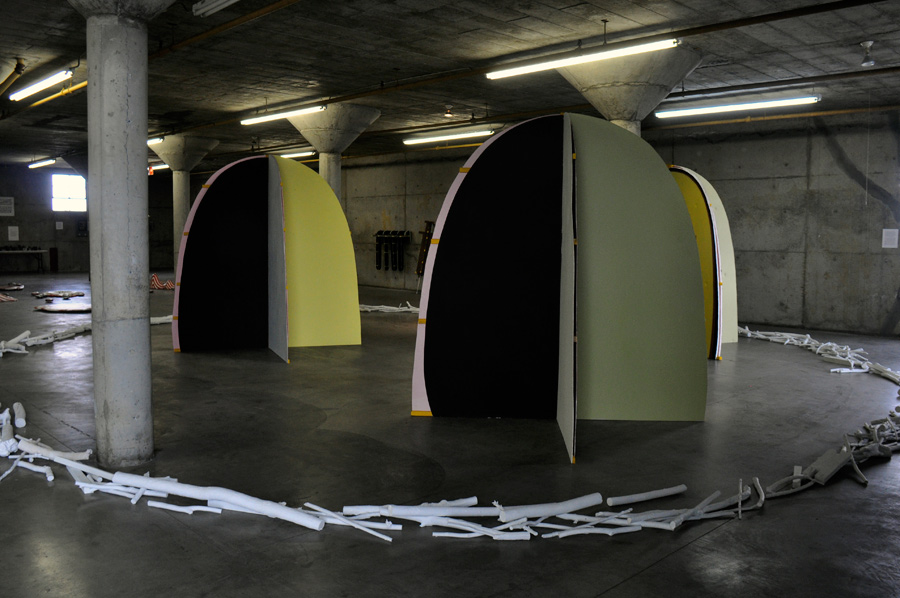 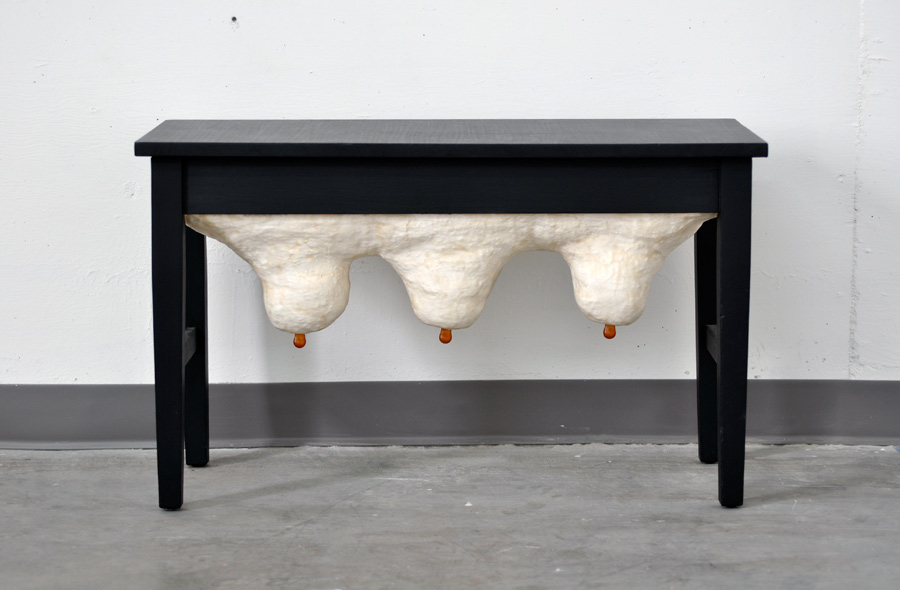 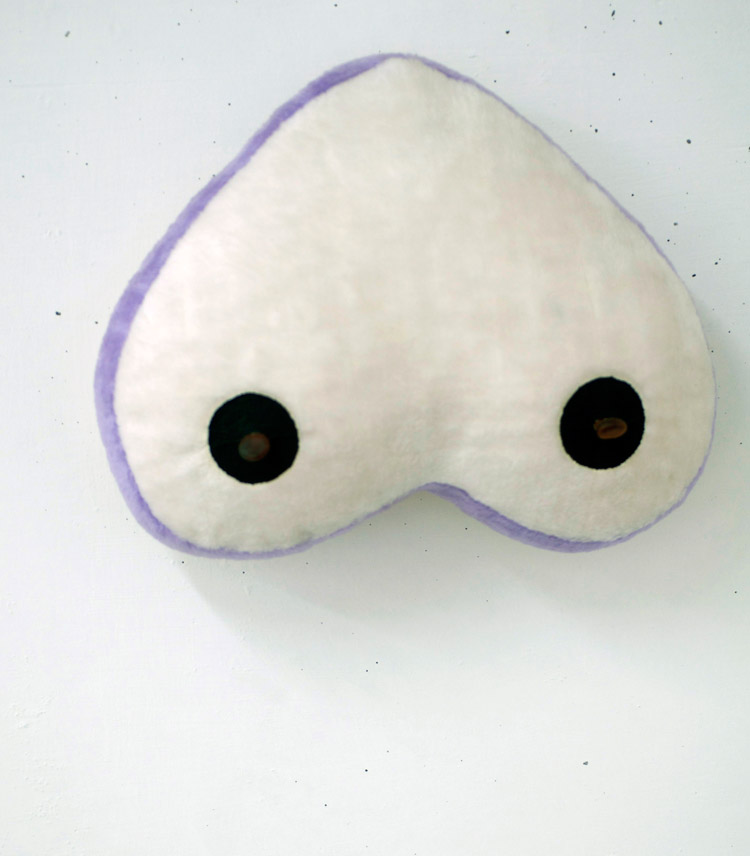 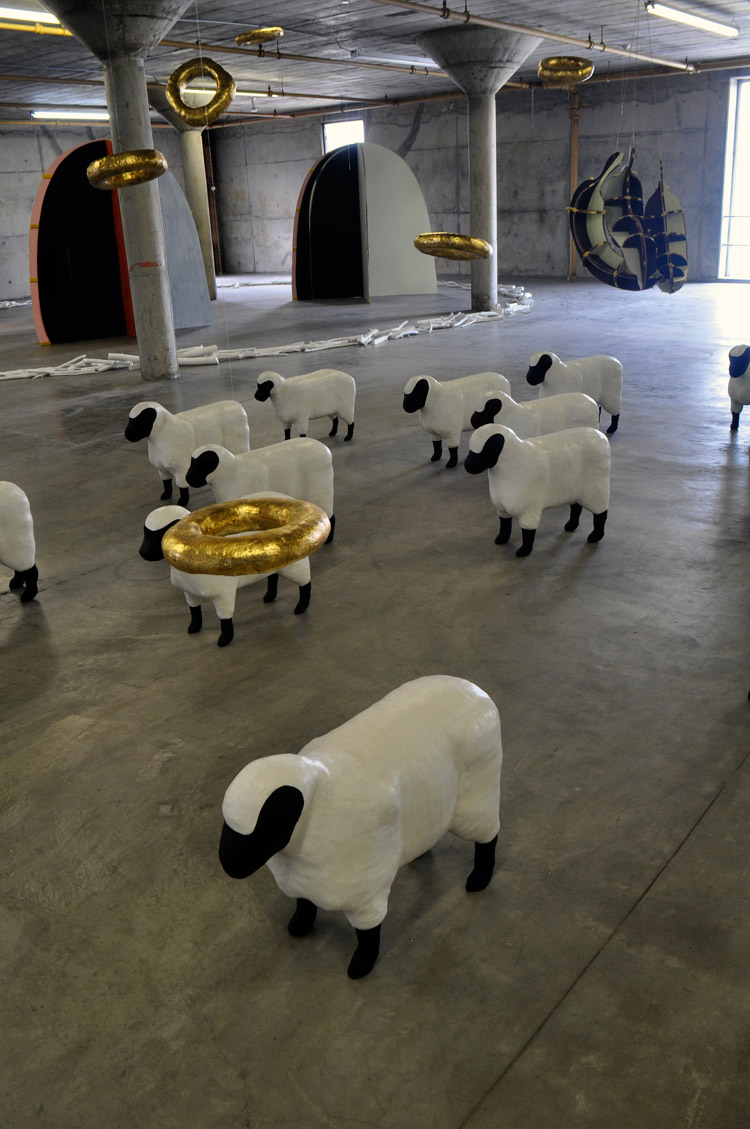 This Article originally was published in White Hot Magazine